Since October 2010 Diana Joseph is member of the managing director's staff at the Imre Kertész Kolleg in Jena. From 2004 to 2006 she completed a master's degree in German Studies/Culture and Communication at Technical University of Dresden. Joseph attended postgraduate classes in German as a second language at Friedrich Schiller University Jena from 2003 untill 2004. She completed a university degree in English and German Studies at the teaching-training university in Bălţi, Moldova in 2003. 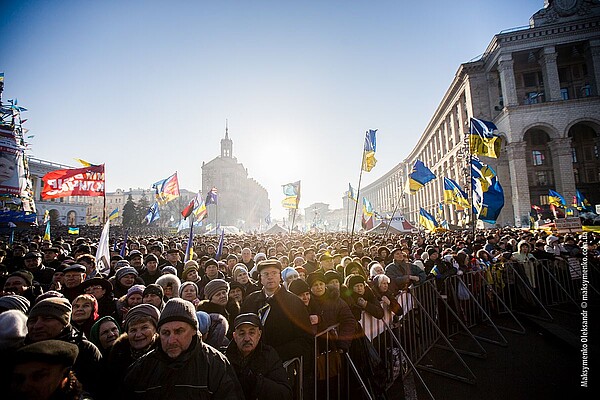 The Ukrainian crisis and the challenges faced by the new government of that country have begun to make other CIS member states nervous. And nowhere is this more apparent than in Moldova. The country is particularly affected by the current situation in Ukraine, because of the Transnistrian and Gagauzian regions in Moldova. These two regions are centers of ethnopolitical conflicts, which pertain to rights of representation, territory, and identity and they are both considered to be under Russian influence.

After Russian President Vladimir Putin signed a treaty making Crimea part of Russia on 18 March 2014, Moldova fears that it may face the same fate, given that ethnic Russians living in a breakaway territory of the Pridnestrovian Moldavian Republic have undertaken the first steps to join Russia. Russian loyalists in the region of Trans-Dniester asked the Russian Parliament to draw up new laws that would allow them to join the country. The region has been seeking integration into the Russian Federation for two decades already and is using the opportunity presented by the latest developments in Ukraine. The Ukrainian conflict managed to undermine the stability of the Republic of Moldova by challenging its sovereignty. Moldova and Ukraine are prime examples of the imperial legacy of the hegemonic Russian policy that has operated for decades. Economic considerations forced both countries to tailor their foreign policies to competing needs.[1] The imperial legacy also extends to territorial and minority questions, as well as new political conflicts determined by secessionist tendencies in Transnistria and Crimea.

Present-day Moldova is situated at a crossroads between East and West, not only geographically, but also historically and culturally. Historically known as Bessarabia, Moldova is a largely Romanian-speaking entity. Bessarabia was part of Romania after the First World War until it was occupied by the Soviets in 1940. By the summer of 1940, Moldovan Bessarabia had been joined with Northern Bucovina and the six counties that made up the Moldovan Autonomous Soviet Socialist Republic on the left (east) bank of the Dniester River (presentday Transnistria) to form the Moldovan Soviet Socialist Republic (MSSR).[2] Transnistria declared its independence from the MSSR on September 2, 1990 and subsequently declared its independence from Moldova after the collapse of the Soviet Union. The ethnic minorities who controlled the city governments of Tiraspol, Bender (Tighina),[3] and Rîbnița refused to accept the legitimacy of the new Moldovan parliament and asserted sovereignty over local institutions. Tiraspol, the capital of Transnistria, organized referenda throughout the region and the majority of voters chose local autonomy from Chișinău.

In the years since then several actors with different geopolitical, economic and strategic interests have been involved in the conflict. Russia, which has a major interest in the survival of Transnistria, has supported the separatists there in various areas (political, military, and economic with investments and an energy supply). Russia uses its army[4] in Transnistria to put pressure on Moldova and to ward off possible NATO and EU enlargements. It is also part of the so-called 5+2 negotiation group (Moldova, Transnistria, Russia, Ukraine, OSCE + US and EU) that was established to help resolve the conflict. As part of this group, Ukraine's role was ambiguous in the past. Transnistria controls 452 kilometers of the Moldovan-Ukrainian border and all Transnistria's trade – legal and illegal – is conducted through Ukraine. Since the 'Orange Revolution' Ukraine has actively tried to find a solution to the conflict. At the beginning of the conflict, the United States played an active diplomatic role in the conflict, supporting the Government in Chișinău. Washington saw the Transnistrian issue as a neo-imperialistic attempt by Russia to influence the former Soviet republic.[5] The EU started to show more interest in the Transnistrian issue in 2002 and sought to resolve the conflict in two ways: by challenging the status quo and by offering Moldova a more attractive alternative to Russian rule.[6] The reorientation of Moldova's policy away from Russia and towards the EU and Europe in 2004 was accompanied by a steady increase in public support for EU membership. The EU had already signaled its commitment to securing a European future for the country. In order to accelerate the Republic of Moldova's political association with and economic integration into the EU, the EU and the Republic of Moldova have entered negotiations on an association agreement, which focuses on core reforms, economic recovery, governance, sector co-operation, and liberalization of Moldova's trade with the EU. In November 2013 Moldova signed an association agreement with the European Union. The media reported as much about the huge symbolic importance as the material political respond for seeing Association Agreement as a decisive step in the positioning of the country between East and West. Much like Ukraine, Moldova finds itself in a precarious situation, torn between forging closer ties with the EU and maintaining its traditional economic relationship with Russia. Unlike Ukraine, Moldova did not succumb to pressure from Moscow and began the process of officially signing the association agreement in November of last year. Moldova's decision, however, did not stop Russia's deputy prime minister from visiting Moldova and threatening to introduce economic sanctions. Deputy Prime Minister Dmitry Rogozin was quoted as saying that "the measures taken to hinder the communication of Transnistria with the rest of the world will be a direct threat to the security and constitutional freedom of the 200 000 citizens of Russia who reside permanently in Transnistria." Rogozin later remarked that Russia views itself as "the guarantor of the constitutional rights of its citizens."[7] Moldova's governing pro-European coalition intends to officially sign the association agreement with the European Union by August of this year and fears of Russian reprisals are real. The Kremlin employed similar tactics with Ukraine and Armenia, resulting in both abandoning the agreement. As Europe's poorest state, which relies heavily on agriculture and remittances from abroad, Moldova is especially susceptible to Russian coercion. Members of the communist opposition in Chișinău's parliament demanded that the government revise the recently signed association agreement. They claim that the agreement will bring serious consequences not only for the economy, but also for the politics, culture and history of Moldova.[8] According to the communist deputy Sergiu Stati, the latest events in the Ukraine show that the European Union's Eastern partnership project has failed because it did not take the particular circumstances of the countries into consideration. The Moldovan Communist Party has proposed further negotiations on the association agreement between representatives of the EU, Chișinău, Tiraspol, and the Russian Federation.[9] One EU diplomat noted warily in Chișinău that if Moldova signs the agreement this year, a destabilization of the situation in Transnistria is to be expected.[10]

Just as the Crimea voted to join the Russian Federation in a controversial referendum, there are heightened fears that Russia may use Transnistria in a similar way to increase its influence in Europe. The emergence of a Europe-orientated government in Moldova and the country's subsequent moves towards closer integration with the European Union have also upset the balance between Chișinău and Gagauzia. Gagauzia is a largely agricultural region in the south of the country. The Gagauz are ethnically Turkic and speak a dialect of the Turkish language. They account for fewer than 150 000 of Moldova's population of 3.4 million. This territory is significant in the context of Moldova's strategic location between Russia, Turkey, and the European Union. Since Moldova's independence from the Soviet Union, Gagauzia has had strong separatist tendencies. The region declared its independence from Moldova in August 1991, but after negotiations, Chișinău agreed to give the region the status of a "special autonomous zone" in 1994.[11] Since then the political situation there has been relatively stable. Yet Chișinău's control was challenged in February 2014, when the authorities in Gagauzia announced plans to hold a referendum on the autonomy issue after the Moldovan government signed key integration agreements with the European Union. The majority of voters in the referendum voted in favor of integration with Russia and rejected stronger EU ties.[12] In addition, 98.9 % of voters supported Gagauzia's right to declare its independence should Moldova lose or surrender its own independence. The Moldovan government claimed that the referendum in Gagauzia was unconstitutional and illegitimate.[13] In the light of current developments, Ukraine is also keeping a watchful eye on neighboring regions, including Transnistria. A move by the renegade state to join the Russian Federation would see Ukraine further geographically isolated from Europe. There are also suspicions that Russian troops have been recruiting activists on the territory of Transnistria to go to Odessa to participate in riots and destabilize the region. "Moldova is not able to control a portion of its territory due to the presence of Russian military troops and the separatist regime," says Vlad Spânu, a former diplomat who heads the Washington-based Moldova Foundation, which advocates a peaceful solution to the Transnistrian dispute.[14]

Western states have also realized that Transnistria has become a sticking point for the EU and they advise against traveling to the area, where most countries cannot provide consular assistance. Moldova's Prime Minister Iurie Leancă talked to BCC World about the urgent need to resolve the Transnistrian conflict, predicting that otherwise "the sickness of Russian separatism will become a dangerous and contagious problem, not only for Moldova, but also for the European Union." Though Transnistria has been the subject of negotiations involving Russia, the EU, and the Unites States for years, it remains a 'frozen conflict' with no real discussion of its political status. The prime minister has set an optimistic target of 2019 for the country to join the European Union. He also wants to consolidate Moldova's position as a NATO ally, despite its official policy of being militarily neutral.[15] Given the resurgence of Cold War era hostilities between Russia and the West, one would expect the EU to do more to win over Moldova and expedite its goal of EU integration. The EU should make the region's undefined status a hindrance for the Transnistrian economy, giving commercial advantages to those companies that act according to Chișinău's regulations and laws. The presence of the EU should be more evident on the territory of Transnistria, promoting dialogue with reformist groups in Transnistria and cooperation with Western and Ukrainian NGOs. As the situation in Ukraine shows, the efforts of former Soviet bloc countries towards further integration with the EU generate significant opposition from Russia and from domestic elements, in Moldova's case from Transnistria and Gagauzia, with potentially destabilizing consequences. In the case of Ukraine, and possibly Moldova, geopolitical constraints make it extremely difficult for either the West or Russia to hold sway. This not only impedes prospects for further integration, but can also destabilize each country as the competition for influence intensifies. The Moldovan government is determined to integrate with the European mainstream, but it is also clearly concerned that the Crimean crisis could generate a new wave of separatism in Transnistria and Gagauzia. The challenges the country faces in the context of the Ukrainian crisis remain the responsibility not only of the country itself, but also of the international community.